Winephabet Street E is for Etna

This month on Winephabet Street Lori and I explored the Mt Etna region of Italy for the letter E. I had a great presentation all prepared and then my 18 month old Lenovo computer crashed. I wasn’t a happy camper and tried to recreate what I had put together for the event.

Mt Etna is a DOC regions that sits on the north, east and south slopes of the Etna Volcano in the province of Catania. It’s been farmed since ancient times going way back to when the Greeks conquered the region in 729 BC and planted grapes.

Thirty years ago there were just 5 wine producers in the region. The resurgence is due to Giuseppe Benanti who began producing wines from local varieties on his farm in the Etna region in the early 1990’s. Now many are buying up land and planting in the region.

Etna’s primary wine producing zone rises up the slopes of Mt. Etna to an elevation of 3,500 feet and higher. They are the highest commercial vineyards in the world. Due to the steepness the harvesting is all done by hand. Etna’s soil is rich wiht volcanic nutrients that are hospitable to growing frapes. The high elevation vineyards are also an inviting environment for growing grapes with the hot Mediterranean sun while the warm Mediterranean breezes are conductive to an extended growing season. Etna’s rich volcanic soil also contains a high concentration of sand a compination that has proved to be highly resistant to the phylloxera root pest that decimated other European vineyards in the late 1800’s.

The wines produced in the region are primarily red and white with some Rose (Rosato).

Etna Rosso (red) is a blended wine with 80% Nerello Mascalese and 20% Nerello Cappuccio both indigenous to the region. It’s been said that Etna Rosso wines have a nice structure similar to Barolo. They don’t require aging and like to be drank young.

Etna Bianco is a blend of 60% Carricante and 40% other whites grown in the region. 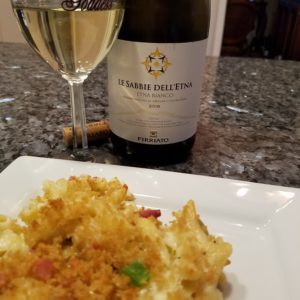 For this episode I choose a Firriato Le Sabbie Dell’Etna Etna Bianco which is a blend of Catarratto and Carricante. I was so pleasantly surprised on how much I enjoyed this wine. You’ll see how excited I am when you listen to the video or audio. I’ll save it for there.

Don’t forget to sign up for November 20th when Winephabet Street explores F for Furmint. Sign up here.

Ep. 5 Welcome to Winephabet Street E is for Etna

Below find the replay of Winephabet Street. If you have problems viewing you can view it in YouTube.

Don’t have time to view it the podcast is below for download or you can listen to it on Uncork Your Mind in Itunes, Stitcher, Google Play Music, IHeart Radio, Soundcloud. Don’t forget to leave us a review.