I recently had the opportunity to speak with Lou Caracciolo of Amalthea Cellars located in Atco, New Jersey.  In this podcast you will get a little introduction to New Jersey wines, a little history on the region, the different AVA’s and the style of wine that Lou crafts.

There are approximately 50 wineries in New Jersey and the wine region dates back to 1750’s when the Renault Winery was founded.  They had a lot of trouble growing vinifera due to black rot, downey and powdery mildew.  It gave them problems until the middle of the 20th century.  Then came some changes in agriculture chemistry in the 70’s and that changed as they were able to tackle the issues at hand.

The Garden State Wine Growers Association hosts New Jersey wine festivals throughout the state.  This weekend in it’s 5th year is the Cape May Wine Festival the last in a series of wine festivals in the state that began back in April.

There are a few wine trails throughout New Jersey.  The Garden State Wine Growers Association lists them at http://www.newjerseywines.com/wine-trails.html and there is also another website I found  Vintage South Jersey http://www.vintagesouthjersey.com/page.php?page=trips-and-trails/main that lists some of the trails in South Jersey. 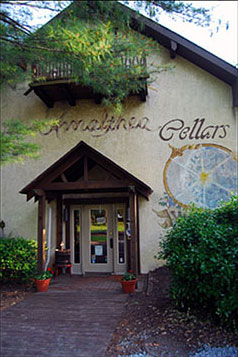 A little about Lou Caracciolo and Amalthea Cellars.  They grow Cabernet Sauvignon, Chardonnay, Merlot and some French American hybrids.  Lou takes the hands off approach and makes wine like it was made in Bordeaux.  They are open Friday – Sunday for tastings from 11am-5pm.  For more information you can find them online at

Both the Garden State Wine Growers Association and Amalthea Cellars can be found on Facebook and Twitter.

Hope you enjoy the podcast.