Many times when I begin the podcasts there are some great conversations that don’t make it to the final cut. One of these conversations was about Rhode Island and what Stacia really wanted to do when she graduated high school.  Wine making wasn’t even in her vocabulary.  So  I begin these show notes with a little background on Stacia Williams that we spoke in detail about after podcast. 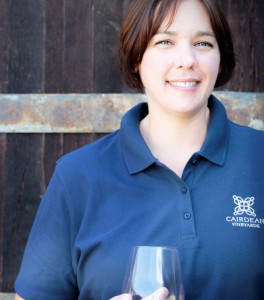 Stacia grew up in Rhode Island and wanted to go to college at Johnson & Wales and major in Hotel & Restaurant Management. Her family talked her out of it, they said they are all engineers and scientist she should follow in those steps so she went into computer science.  Once in the real world she entered into the software industry where she found herself  drinking lots of wine, attending  wine tastings, then she wanted to make wine. Stacia and Edwin met at a party where she took him down to taste her the wine that she was making in her basement and the rest is history!

They moved to Fresno, CA so Stacia could study enology and viticulture at Fresno State and worked in the vineyard and winery on campus. After she was finished with her studies they looked all over the world for their place to settled and decided on Napa.  Why?  Because out of all the places they looked, they realized the wines that are made in Napa are the wines they like to drink the most.

They found a 50 acre parcel in St. Helena.  Their goal was to have a small winery with a small vineyard out front and make enough wine to support the vineyard and house. That would take a while since it takes 3 years after you plant vines to harvest your first crop to crush.  They began to look at other vineyards and they purchased a vineyard in the Coombsville AVA, just east of Napa  and began farming on it right away.   This vineyard, Acquaintance  is home to mostly Cabernet Sauvignon but all 5 Bordeaux reds are planted there.

Their Atlas Peak Syrah was just rated 98 points, best in class and region and best in California at the California State Fair wine competition.   This is mountain fruit from Atlas Peak aged in 70% new oak, half French half American for 3 years.  Soon to be released and you will get a preview of the tasting notes in the podcast.

They also have an on premise restaurant that opened June 5, 2014   “The Farmer & The Fox” and it’s been very well received. Executive Chef Joseph Humphrey has a wealth of knowledge and great creativity.  It does have a Scotch flare with gastro pub menu featuring  items such as burgers, smoked mussel chowder and popovers.  Unique and special items such as Lamb Tartar, Rabbit Wellington and Game Pie (soft pastry dough, mustard cream pie, wild boar, duck and venison). A great feature is no corkage fee at the restaurant.

Cairdean Estates is located on Highway 29 in St Helena, drive through downtown St Helena and they are 1.5 miles outside of town on the left.  Visit them on line at http://www.cairdeanestate.com/ and on Facebook, Twitter and Instagram.  The tasting room is open until 8pm.

It makes people happy.  they come to you, they want to enjoy their experience, they want to drink the wine and enjoy the food and that makes me happy. ~ Stacia Williams

2012 Haley Margaret – This wine is named after Stacia’s cousin who passed away from cystic fibrosis 2012 at the age of 25.  This wine is a tribute to Haley Margaret to keep her memory alive and to raise awareness of the disease.  They pledge $10 sold of this wine to the Cystic Fibrosis Foundation.  This is a blend of Roussanne, Pinot Gris and Viogner.

A wonderful wine and supports a great cause. Expressions of lemon curd, grapefruit  and some stone fruit. Very light with balanced acidity is smooth and delicious.  Great with food or a stand alone wine.